Empty Nose Syndrome Can Steal Away Your Life

Empty Nose Syndrome Can Steal Away Your Life 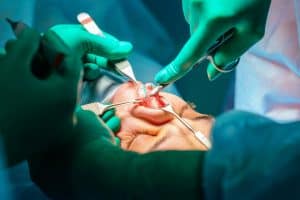 A condition known as empty nose syndrome (ENS) is produced as a result of improperly performed sinus surgery. When a surgeon performing this procedure inadvertently or carelessly removes one or more bones in your nose referred to as turbinates, the consequences can be devastating for the patient. These turbinates consist of a network of bones and blood vessels that are designed to moisten, warm, and filter the air you inhale. For instance, when you come down with a cold, the moist surfaces of these turbinates swell up, giving you a stuffy nose.

Although the name implies that the nose either is or feels empty, the actual result of this condition gives you a sense that your nose is stuffed up, with the feeling that you are unable to breathe. If you have sustained this injury as a result of nose surgery, you may have the right to pursue damages in a medical malpractice lawsuit.

One woman’s horrific ordeal with ENS

This surgery that opens up the sinus is actually a commonly performed procedure. However, one woman – Barbara Schmidt – is bringing significant publicity to this condition due to her personal experience with the surgery that was truly horrific. She describes the condition as “a totally avoidable, physician-induced deformity resulting in an as-of-yet incurable and debilitating condition.”

“During my initial surgery, my turbinates ― what I’ve learned are small but essential organs that sense airflow and signal your brain as to whether you’re breathing ― had been irreversibly  damaged. Doctors, including accredited ear, nose and throat surgeons who should have known better but didn’t ― severed vital nerves that were critical to ensuring the proper function of my autonomic nervous system, which governs involuntary functions such as breathing, heartbeat and temperature control. My life, like those of untold numbers of similar victims across the world, would never be the same.”

Schmidt relates that even though her body was actually receiving sufficient oxygen, due to the damage done to her turbinates that led to the ENS condition, her brain did not detect that she was receiving enough oxygen. This caused her continual distress and anxiety, as she experienced a constant feeling of suffocation.

The torturous symptoms and life consequences of ENS

The nightmarish symptoms of ENS can manifest the moment you wake up from surgery, or they can gradually gain momentum as the damaged nerves die over a period of time. This process can take anywhere from weeks to years to develop. Victims of this condition suffer from a never ending panic state they cannot control. Significant stress is placed upon the mind, negatively affecting the body at the same time. Stress hormones are released that cause damage to the various organs of the body, all of which can produce truly catastrophic injuries.

The social impact of ENS upon the victim can be devastating as well, including the loss of one’s family, marriage, job, home, and independence.

Far too many patients afflicted by ENS have taken their own lives after suffering relentless suffocation as well as the ignorance of doctors to their actual condition. Sometimes the condition has been relegated to a psychiatric disorder instead of a legitimate physical condition with specific symptoms. Some have deemed living as a paraplegic a much better option than living with ENS.

Suffering medical malpractice due to a botched nose surgery or other form of negligence can be a devastating experience. The Knoxville medical malpractice attorneys at Banks and Jones are committed to providing you with tenacious and intelligent advocacy to help you recover the compensation you deserve for your injuries and losses. To arrange a free consultation about your case, call us today at 865-546-2141 or fill out our contact form.

"Scott Jones is one of the top-rated attorneys in the nation, and has always represented us as only someone with...

"Can't recommend Banks & Jones enough. I'm a recent transplant to Knoxville, and these lawyers have quickly become my "go to" for all things legal. Susan Haas was referred to me by a close friend. I was transitioning from the military to civilian life. I hadn’t updated my wills or powers of attorney in quite a while. Susan was great. She walked me through the process from start to finish. She returned calls promptly, and she worked with my crazy, sometimes hectic schedule. She listened to my intent and followed up with questions regarding details I had not considered. She contacted me several times throughout the process to ensure she had gotten everything correct. She has continued to provide me with excellent advice and referred me to the appropriate parties when things fall outside her area of expertise. Highly recommend!"
https://www.banksjones.com/testimonials/kevin-c/
5
5
Banks & Jones, Attorneys at Law